How to Stop Ruminating and be More Compassionate

I was working with a patient on how to stop ruminating when he said something that was very insightful and perfectly described the process of how to be more compassionate to yourself.

Like many people, Ashok (not his real name) ruminated about his past mistakes endlessly. He rehashed decisions he had made and failures he’d experienced. We can look at this process as our threat-based primal brain trying to learn from these experiences to keep us safe from future dangers. 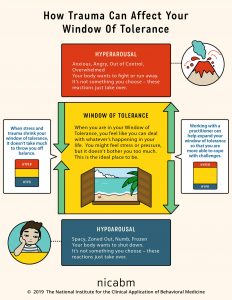 But many people get stuck in loops of self-criticism that go way beyond what might be helpful and actually become self-destructive. The rumination is so painful it creates more fear and anxiety and depression. This threat response puts a person into the “fight-or-flight” system in the body. Instead of staying in the the Window of Tolerance (see graphic), a person may be hyper-vigilant or hypo-vigilant or may alternate between the two extremes. When outside the Window of Tolerance the emotions become difficult to manage and our “thinking brain” is less effective, causing a downward spiral: More fear, less cognitive control, bigger emotions leads to more fear, etc. Just when we need our wise, mindful selves to take charge with logic and calm, it is the least available to us.

How do we stop this rumination process? With self-compassion.

I had worked with Adam to understand these concepts and to learn mindful self-compassion skills. One day he made the connection perfectly with this wonderful metaphor that described the difference between rumination and self-compassion. He said that self-recrimination is like arguing with yourself and never winning. When you do not accept your past faults and shameful behaviors, it is like you are constantly arguing with yourself. But the argument goes nowhere and just repeats endlessly — there is no solution. You might have the unconscious intention of trying to help yourself learn from these mistakes, but instead you are just provoking unnecessary emotional pain.

Sometimes in therapy I also call self-criticism “an abusive relationship with yourself” to highlight this process of constant verbal putdowns and criticism that can occur in one’s head on an endless loop.

In contrast, when you engage in self-compassion and accept those shameful experiences and forgive yourself, it is like apologizing to yourself. The argument miraculously ends! There is no cycle of self-recrimination to occur, because you are no longer arguing with yourself.

Consider that this is the same process that occurs when you are arguing with someone else. If neither one of you admits you are wrong, the argument can go on forever. But what happens if one of you realizes you are wrong, acknowledges your mistake and apologizes? There is nothing more to argue about and so the argument ends! Ideally, the relationship is repaired in a loving way because you gracefully admitted your mistake and accepted it with equanimity.

Self-compassion is like apologizing and repairing the relationship with yourself. One of the prompts we use in compassion-based therapy is: Would you say this to a friend? So ask yourself: Would you argue endlessly with a friend or loved one about something you know is your fault? Wouldn’t you just admit that is was a mistake and move on? Try doing the same thing for yourself and see if your rumination and anxiety lessen.

Of course, this discussion brings us to the emotion of shame — the likely culprit that keeps people stuck in self-criticism and rumination loops. Those who did not learn healthy shame tolerance in childhood struggle to move gracefully through experience that bring on feelings of inadequacy or guilt. Some learned to internalize or Self-Blame excessively for real or perceived faults, and they usually are the most likely to ruminate and self-flagellate. Those with poor shame tolerance who are Other-Blamers or who have antisocial or narcissistic traits WILL argue endlessly to avoid apologizing.  They have learned to externalize or project experiences of shame to avoid feeling they are to blame.

The good news is that self-compassion is the antidote to shame and helps us tolerate this difficult emotion, freeing us from these unhealthy patterns of excessive self-shaming or defensive anger when shamed.

How to Develop Compassion