Why does he abuse me? Stop asking this question!

Janine is divorcing her emotionally abusive narcissistic husband and our weekly therapy sessions are often an exploration of her rollercoaster of conflicting feelings. She is grieving a marriage ending and life not turning out as she had hoped. Naturally, she has uncertainty about her future life and worries about the impact on her children, lifestyle, and finances. And, yes, she expresses hope for a better life without the coercion, manipulation, and soul-crushing destruction of her self-confidence. She especially comes to see the harm to her self-image caused by his criticism, blame-shifting, and freeze-outs that all signaled she was not good enough.

In the delicate dance of a therapist, I avoid giving Janine too much direct advice and encourage her to explore her fluctuating resolve about divorcing her husband. Even if a person logically knows she must leave her toxic partner, the emotional brain is often drawn back toward a husband or lover due to complex psychological factors.

Why does a person return to an abusive relationship? The first reason has roots in our our hunter-gatherer history and how that affected our brains. Research shows that we have a human tendency to look for patterns to try to make sense of things. Our ancestors who were good at seeing patterns probably were more likely to survive because they had the life-saving cognitive skills of being able to remember where the raspberries grow or what time of year the salmon spawn up river.

I think people ask “why does he do it?” so that if they can find a good answer, then they will see the pattern and feel better having gained understanding of that pattern. Most victims come to understand that they have to learn the pattern of abuse so that they can avoid it in future relationships.

Certainly, a victim can learn that her tendency to be a Self-blamer has something to do with being attracted to and tolerating an abusive Other-blamer. A Self-blamer’s internalizing of excessive, unwarranted shame is very attractive to an Other-blamer who cannot tolerate shame and wants to find a way to externalize or off-load his disowned feelings of unworthiness onto someone else via blame-shifting.

The “trauma bond” is another explanation for a constant search for an explanation. Narcissists, sociopaths and other insecure people are often very good, initially, at disguising their dark sides. They “love bomb” to fool people into trusting them, only letting their evil seep out when they know the victim is committed to the relationship. Like a cat toying with a mouse, most “narcipaths” seem to have an innate sense of exactly how much abuse they can get away with before their victim bolts, so they titrate out a balance of love and hate, usually upping the abuse gradually over time so the victim doesn’t notice and slowly learns to tolerate it. Confused people naturally try to become “unconfused” by seeking an explanation.

By the time Janine and other victims are ready to leave a relationship, they often are very blind to the unbalanced, unfair or even dangerous nature of the situation. In this befuddlement, their primal brain can hijack their rational brain. Fear, after all, is an emotion that tries to help us make sense of dangerous incidents or people, so that we can find patterns, learn from them and avoid them in the future. Touch a hot stove, and your brain instantly learns not to do that again. Every time you get near a stove your brain sees this “pattern” and will send a warning signal to be careful. However, being in a relationship with a toxic person is not usually such a clear message. The trauma bond is one way to understand this mixed messaging.

In therapy, many victims start trying to make sense of their head-scratching, on/off, hot/cold relationship by asking “Why did he treat me so badly? Why didn’t he love me enough? What should I have done to change this situation?”

Attachment theory gives us another reason for the desire to understand “why.” Attachment theory explains that all humans crave bonding or attachment or connection to others, starting with an infant/parent bond and moving into adulthood with intimate or primary relationships becoming the main attachment partner. Most people will become emotionally distressed when an attachment bond is broken and will seek to repair it to seek comfort, just as a child upset by a skinned knee will run to his mother.

Part of healing from abuse is to learn your own attachment pattern and work toward “earned secure attachment,” so that you can more easily break free of unhealthy relationships. The book “Attached,” is a good place to start, as are several videos and articles listed on my Resources page under “Relationships.”

An early task in therapy is to help victims of abuse understand the cold fact that the “why” is merely that her ex is an Other-blamer or someone with traits of a narcissist/sociopath. These personality types learned very poor shame tolerance as children due to some factor in their childhood, likely a narcissistic parent. I educate victims on how to identify Other-blamer character traits and that this is the only “why” the victim needs to understand.

Most victims have a great deal of difficulty wrapping their head around these anti-social behaviors, because the victim is always more pro-social, with a tendency toward moral behaviors of fairness, kindness, and reciprocity. For someone with mostly pro-social morals, it can be very confusing to look at another’s anti-social, immoral behaviors and make sense of them. Most Self-blamers would NEVER think of taking advantage of someone so horribly, yet this is exactly the GOAL of Other-blamers in relationships. It can be difficult to flip the paradigm and understand a very different motivation in relationships. Pro-social people get into relationships to find love, intimacy, trust and connection. Anti-social Other-blamers enter relationships with a fear of these things and a basic distrust of others, because other people could bring accountability into their lives. Instead, they work to manipulate partners into providing attention and narcissistic supply, but they also need to keep partners at a distance to avoid too much shame and criticism.

I educate people like Janine on this spectrum of anti-social and pro-social behaviors so that they see that their approach to human relationships is completely 180 degrees from a narcissistic person’s.

It is also true that Self-blamers have a tendency to focus on fixing themselves, usually through harsh self-criticism. Therefore, knowing “why” provides them that opportunity. 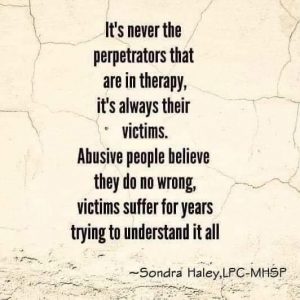 Some perhaps even want to go through this process of understanding and fixing themselves in the subconscious (or conscious) hope that this will allow them to repair the relationship: “If I only will fix myself in some as-yet-unknown way, then I will be good enough for him and he will stop abusing me.” This pattern of focusing on self-repair is also reinforced by the Other-blamer who cannot be wrong, so deflects blame and shame onto the Self-blamer victim who is held responsible for all the wrongs in the relationship.

Another important fact that I work to bring out in therapy is that it is extremely unlikely that the narcipath will ever change. Learning “why” he did what he did doesn’t even really matter if he will never change.