What Happens When a Bad-Tempered, Distractible Doofus Runs an Empire? 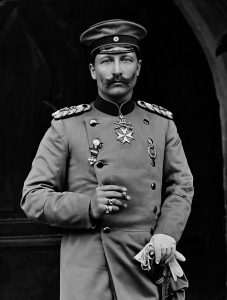 Check out a very worthwhile read in The New Yorker on the amazing parallels in dysfunctional, narcissistic behavior between Donald Trump and Kaiser Wilhelm II of Germany. The article is by Miranda Carter, who wrote a biography, “George, Nicholas and Wilhelm:  Three Royal Cousins and the Road to World War I”.

The parallels are on one level amusing, even down to Wilhelm’s quirky waxed mustache (Trump’s hair!”), need for adulation, and over-focus on media coverage. But on a more concerning level, Trump mirrors Wilhelm’s embrace of far-right ideologues who clamored for war — and eventually got it. “If international conflict is around the corner, it would seem that you really don’t want a narcissist in control of a global power.”

Wilhelm’s behaviors are a classic list of behaviors that I categorize as “Other-Blaming.” These personality types have poor shame tolerance and can never be wrong, which leads them to engage in toxic and immoral behaviors ranging from petty vindictiveness to cruel abuse.

Merely writing about Wilhelm for six years caused Carter to feel: “It was dispiriting, even oppressive, to spend so much time around someone who never learned, and never changed.” (Wow, sounds exactly like PTSD – President Trump Stress Disorder).

And this is exactly why Other-Blamers are so distasteful to be with – they cannot learn or change because they cannot be self-reflective and learn from their mistakes. Their lack of accountability can also cause their behaviors to escalate. They become more and more defensive, angry, unstable or even enraged when they do not get their way.

Carter outlines Wilhelm’s immature, ever-changing and impetuous “foreign policy” which seemed to focus on randomly belittling all other foreign leaders. (Hmm, who does that sound like?) This escalated tensions and de-stabilized Europe. “The Kaiser viewed other people in instrumental terms, was a compulsive liar, and seemed to have a limited understanding of cause and effect.”

And as many have observed about modern day America, Wilhelm reflected what was happening in Germany as a country: “Wilhelm’s touchiness, his unpredictability, his need to be acknowledged: these things struck a chord with elements in Germany, which was in a kind of adolescent spasm—quick to perceive slights, excited by the idea of flexing its muscles, filled with a sense of entitlement.”

Other-Blamers, because of their poor shame tolerance, are very quick to perceive slights and feel they are above the law or social norms — because the law brings accountability, which they avoid, because with it brings shame.

Other-Blamers like to play games of us versus them, because they have a paranoid fear of others, because interacting with others may bring shame or feelings of inadequacy.

I just blogged about concerns about Trump’s rage and this article describes Wilhelm’s cyclical mental breakdowns. Does this type of personality seem like someone who should be head of the world’s largest superpower?

These parallels should not surprise anyone, because human behavior is actually very predictable, especially when it comes to shame intolerance. When a person is raised to have feelings of low self-worth, and not held accountable as a child, they learn to have a distaste for shame that makes them engage in a range of toxic blame-shifting behaviors that destroy relationships and even countries when they are put into power.

Finally, this article should be further evidence that mental health professionals absolutely MUST speak up about Trump’s instability and dangerousness. These behaviors are completely predictable: Has anything he done surprised you, except in the severity and frequency of the chaos he creates?  It is dangerous to ignore what are completely predictable behaviors that may, in today’s world, lead not just to world war, but to world annihilation.