Review (Part 1): “Too Much and Never Enough: How My Family Created the World’s Most Dangerous Man,” by Mary L. Trump, PhD 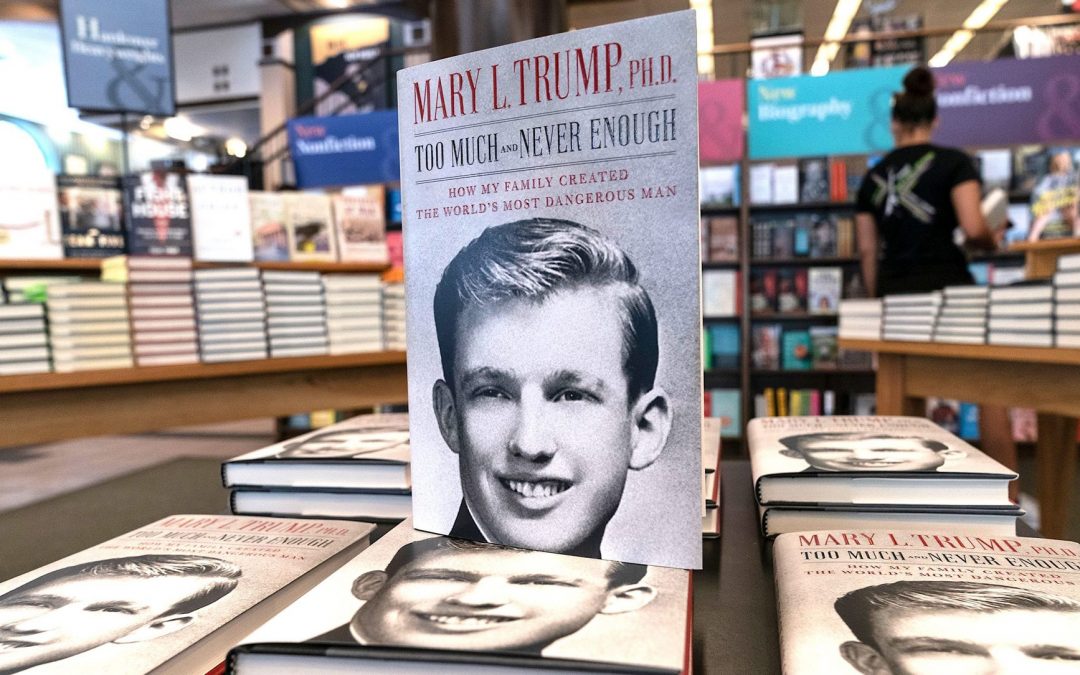 The Formation of Trump’s Narcissistic Personality

I originally did not plan to read this book by Donald Trump’s niece, guessing that it would not really provide much new insight into his character. But then I was invited to speak on it in comparison to “The Dangerous Case of Donald Trump,” which I contributed to, so I purchased it and, with the trepidation of one wary of being re-traumatized, I began to read.

I have not read any other biographies of Donald and only cursorily scanned some articles about his family. Certainly, Mary offers fascinating granular details about the family’s life, but these details really do just confirm what we already knew or could have guessed from Donald’s character:  His father, Fred Trump, was a self-promoting, greedy, heartless, sadistic sociopath who created Donald in his monstrous image. His wife, also named Mary and called “Gam”, was both physically and emotionally absent and struggled to provide her children warm or protected childhoods. For more on how their parenting styles created a sociopath, see Part 3 of this blog.

Mary Trump’s book confirms that the family was cold, lacking in emotion, promoted individualism and competition over filial love and caring, and promoted wealth over generosity, among many negative traits. Fred pitted the children against each other in seeking his approval and financial dependence. Fred was the classic “Other-Blamer,” which I describe in my writing, who cannot tolerate shame and blame-shifts to others to avoid accountability.

What I’d like to focus on in this blog are Mary’s descriptions of Donald that support my hypothesis about him and those with his personality type — that the core of their behavior is low self-worth, which leads to an intolerance for the emotion of shame. I disagree with Mary that Donald needs a full battery of psychological tests and that his behaviors are “inexplicable”. Instead I believe his behaviors are very explainable. I suggest we categorize Donald’s type of personality as an Other-Blamer. This label clearly highlights how he responds to experiences of shame or humiliation that layer onto his existing feelings of unworthiness, then trigger his very obvious behaviors, such as lying, lack of accountability, sadism and cruelty. These behaviors are all ways of attempting to protect his fragile psyche from feeling weak or vulnerable.

As a clinical psychologist, Mary says Donald meets all nine criteria for narcissistic personality disorder, as well as the criteria for antisocial and dependent personality disorders, because he is has an inability to make decisions or take responsibility, a discomfort with being alone, and going to excessive lengths to obtain support from others. These “co-morbid disorders” are indications, as I have written in the past, of the abject failures of the Diagnostic and Statistical Manual, especially with regard to diagnosing “personality disorders.”

All of these personality disorders are merely unhealthy coping strategies to deal with shame and inferiority.

Donald and Other-Blamers like him learn to defend against shame by externalizing or lashing out at others with a range of behaviors. They blame shift to others and refuse to accept responsibility. They can also be very dependent on others for approval, leading to grandiose, attention-seeking behaviors and obsequiousness to those who are more powerful (such as Vladimir Putin and other foreign autocrats). Other-blamers can be indecisive and have a fear of taking risks, because failure would confirm their flaws. When caught in a failure, they lie to avoid accountability. They dislike experts and facts, because they feel inadequate and ignorant in the face of those who are superior.

These types of personalities never learned healthy shame tolerance in their childhoods. In Trump’s case, it was likely that he saw his father model a complete inability to admit fault and tolerate shame in healthy ways. He saw his father dominate others to avoid being challenged or held accountable. Fred also adopted an attitude of toxic positivity, where dissent or negativity were not tolerated. This allowed him to step away from emotional intimacy, but also to avoid being challenged or criticized in ways that triggered his feelings of inadequacy. If everything is “fine” then there is no need to talk about anything that is distressing or negative.

Writing about the failure of a major real estate development project, Mary notes: “Unable to accept responsibility, much as Donald would later be, Fred blamed Freddy [her father, Fred Trump’s second eldest child] for the failure of Steeplechase. Eventually, Freddy blamed himself.” This also speaks of an ongoing dynamic in relationships with Other-Blamers and is a core component of the abusive nature of these relationships. Other-Blamers cast blame on others, and are often surrounded by Self-Blamers who tend to quickly accept that blame as a way to assuage the Other-blamer and keep the peace. This leads to Self-blamers who to excessively self-criticize — essentially doing the work of the Other-blamer and colluding in their own abuse.

Fred Trump’s behaviors exemplify Other-blamer traits of refusing to accept inadequacy or shame and a desire to bully others into submission to avoid shame: “Convinced of his rightness in all situations, buoyed by his stunning success and a belief in his superiority, he had to punish any challenge to his authority swiftly and decisively and put the challenger in his place.” (p. 200)

The key to assessing Other-blamers is: How do they handle criticism? If they lack accountability in any form, this is diagnostic.

Donald developed his own style of “reckless hyperbole and unearned confidence that hid Donald’s pathological weaknesses and insecurities.” She states “he was forced to become his own cheerleader” to earn his father’s approval. “By the time of the election, Donald met any challenges to his sense of superiority with anger, his fear and vulnerabilities so effectively buried that he didn’t even have to acknowledge they existed. And he never would.”

It is disappointing that Mary fails to identify shame as the core cause of narcissistic behaviors. The closest she gets is to describe it as a “pain” that Donald experiences. While she mentions attachment theory, she fails to connect that the result of insecure attachment bonding between parent and child causes feelings of deep, intrinsic unworthiness in the child. These attachment traumas are essential to understanding human psychology, especially behaviors that result in shame intolerance, such as Other-Blamer and Self-Blamer behaviors.

For more, see Part 2 of this Review.