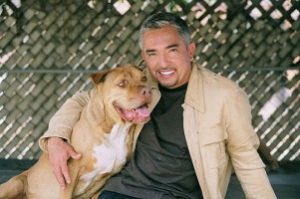 With an ad for “Pack Leader Psychology” appearing in the current issue of “Cesar’s Way” magazine, I thought I’d write about some of the lessons I learned from Cesar Millan on “Dog Whisperer” and explain how these lessons apply to human relationships.

As Cesar teaches, being a pack leader to your dog means doing what is best for the dog, first and foremost. One way to do this is to enforce “rules, boundaries and limitations.” However, many dog owners offer love, but little discipline. They do this with good intentions, believing that love is the most important or even only emotion needed in the relationship.

I learned not to go down this road very early when training Reilly. I read that I should not talk to her or touch her the first 5 minutes when I came home. Talking to a dog and allowing her to approach you signals that she is controlling access to you. Rather, the pack leader controls access to her space. That was tough at first. It is so nice to come home to a wiggling dog and give her a hug and chatter to her. If I had done what I had wanted, to satisfy my emotional needs, I would have talked to her when I came home. But I knew I had to subsume my short-term desires for her long-term needs. I had to do what felt very harsh and actually ignore her for a few minutes. Then I would call her to me, and only then would I pet her and talk to her.

As a family therapist I treat many parents who make the mistake of loving, spoiling and failing to discipline their children. Quite frankly, this need to be a child’s friend, rather than a pack leader, shows that the parents are allowing their own emotional needs to come first, before the needs of the children. They don’t realize they are doing this, of course, but it’s true.

I’ve had parents say they feel guilty disciplining their child. I point out that discipline is for the good of the child in the short- and long-run. It may keep them safe (“Don’t touch the stove”) or it may teach them social and emotional skills that will allow them to have healthy relationships (“Don’t hit and share toys.”)

These parents are avoiding the tough work of setting rules and enforcing them. Instead, they take the easy way out, which is not in the best interests of the child’s emotional or physical health. Just like dogs, children actually crave structure, rules and discipline. Just like dogs, children become anxious and may misbehave when there is no pack leader in their life. Behaviors like tantrums, fights, disrespect, ADHD and Oppositional Defiant Disorder are the result.

Good parents recognize this, get over their own fears and insecurities, and do the hard work of parenting.

The same goes for other relationships, too. It may feel safe and easy to avoid conflict, push problems down the road, and not be honest or assertive. Yet this is unhealthy for the relationship in the long term.

I learned a lot from Cesar’s shows and books and he was a major inspiration to my work on the psychology of relationships. Check out “Cesar’s Way” magazine and my book, which is based on many of his “pack leader” ideas.