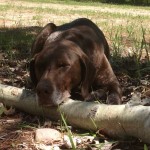 An article (Descent of the Doldrums, by James Danckert) in the July/August 2013 issue of Scientific American Mind takes a new look at boredom as a psychological state. While boredom is difficult to define, research does show that boredom is “linked with worse performance at work and school, lower job satisfaction, more frequent lapses in attention, and heightened rates of drug and alcohol abuse.” None of this should surprise any of us who have experienced ennui.

The author postulates that boredom may result from a disconnection from our thoughts and the external environment.

While this may be true, I would like to reframe this discussion using Pack Leader Psychology and social psychology ideas and, I believe, shed new light on boredom.

It is a given that we humans are very social creatures and have a high need for social approval. Research shows that even small infants pay more attention to images of human faces, even cartoon faces, than they do images of objects. This is all evolutionarily honed behavior that helps us stay connected and attuned to our fellow “packmates,” and helps promote reciprocal behavior and ensure our survival.

Pack Leader Psychology states that people with low self-acceptance and self-worth have an elevated need for social approval and conversely a strong fear of rejection, criticism or disapproval. These people spend a lot of emotional bandwidth looking to others for approval. If they feel rejected or abandoned, they become emotionally bereft (aka “depression”).

For these people situations that do not involve sufficient social approval or adulation are going to feel less stimulating. They are going to crave personal approval, and so are most likely to feel bored in situations where they do not feel they are getting enough external “stimulation.”

Boredom certainly can be due to a tedious lecture in a stuffy room, but I contend that for some people it can also be driven by a perceived sense of social isolation.

I can think back to earlier in my life when I suffered from low self-worth. While I generally found ways to keep myself busy, I do think I experienced boredom much more frequently than I do now. Was I not just intellectually bored, but also emotionally or socially bored? Was I looking for the excitement of interpersonal relationships and interaction or just “something fun to do?” One can be bored to death in the middle of a crowded bar, if one has no one to talk to. It is not the situation that is boring, but the emotional connectivity that is lacking that makes it boring. I have had hilarious good times laughing with friends in a grungy Coney island restaurant and been bored silly alone on vacation on a steep ski slope in Utah.

This article of boredom, while interesting, fails to take into account the concept of social and emotional isolation as causes of boredom and whether people’s personalities and need for approval affect their tendency to become easily bored.