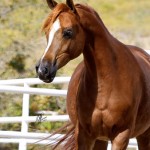 I had never met this child but I intervened immediately, addressing him directly: “Would you like to stand here by the door for a bit until you feel OK?” He nodded shyly and clung to his father. Thankfully, the father followed my lead and stopped being demanding of his son. I then commented to the boy (also modeling emotional attunement for his parents): “You looked a little scared when you came in. It can be a little upsetting coming to a new place, can’t it? It can take awhile to feel safe.” He nodded his head again.

I then said hello to the parents and by that time the child was fine. He walked into the waiting room himself, checked it out and then calmly followed me toward my office. His fear and clinging disappeared and he was relaxed. Total elapsed time was about 30 seconds.

I recalled a saying used in horse training that applies directly to the patience and emotional attunement also needed for parenting:

Just as with horses and dogs, a lack of awareness of a child’s fears and impatience will merely escalate those fears. Pushing for progress in training will guarantee the opposite.

With that anxious child, all it took was someone to notice his fear and honor it. I allowed him to stay where he felt safe and get his emotional feet under himself, and he then was fine seconds later. I reflected his feelings, acknowledged them and validated them. It was normal for him to feel scared and I shared that experience with him.

Imagine if the father had kept forcing the child into the room, telling him there was nothing to worry about, and perhaps getting increasingly angry and agitated himself. It’s not hard to imagine the child having an angry tantrum, sobbing or otherwise becoming emotionally dysregulated. Instead of 30 seconds of delay, it could have turned into 30 minutes of upset.

And the parent would likely blame the child for behavioral problems.

Then the child gets labeled as having ‘ADHD” or “Oppositional Defiant Disorder” and his self-worth gets lower and his behavior worsens.

Long term, if the child and parent experience enough of these incidents, it leads to a strained relationship due to poor bonding or attachment.

Lack of emotional attunement is at the heart of insecure attachments or bonds in relationships.

So many parents — most in fact — are more focused on behaviors than emotions. They fail to notice very important information the child is sending in a rush to accomplish a task or have the child behave a certain way. They often get a negative result — upset kids, oppositional behavior, and arguing.

Of course, the parents in the waiting room were running very late for the appointment and were anxious themselves. That certainly did not help this child arrive in a new environment in a calm, relaxed mood. Again, parents might blame the child for becoming upset, not realizing their involvement in that incident.

I have experienced this “15-minutes rule” many times when dog training. When I want to give my dog a shower, I take some deep breaths and relax myself first. Then I calmly approach her and slowly lead her into the shower. If I try to rush the process and become impatient, she will resist, making the job take even longer. If she starts to get anxious, I pause and let her calm down before moving forward into the bathroom or shower.

The “15-minute rule” also applies in the therapy room when trying to push patients through an emotional experience too quickly can lead them to never fully feel safe being in those emotions.

For parents, learning to be aware of or attuned to a child’s emotions can improve a child’s behaviors in the short term and the strength of the relationship long term. Research also shows it leads to improved emotional intelligence, improved resilience and a a reduced incidence of anxiety and depression in adulthood. Big gains from such a simple skill — a skill that even horse trainers know about.