How to Set Emotional Boundaries With a Narcissist 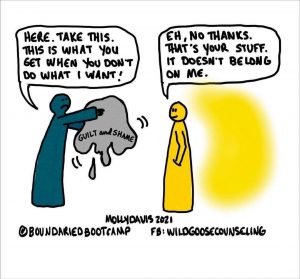 Many people are aware of the need to set boundaries with others, especially with those who have narcissistic or Other-Blamer traits. Often the focus is on setting limitations on behaviors and words, such as telling your spouse that they cannot swear at you or they cannot spend their entire paycheck at the casino.

But this graphic shows an important aspect of boundaries — that they must also include emotions. And boundaries with Other-blamers are often about blocking the incoming emotions of guilt and shame.

The core psychological issue with Other-Blamers is that they cannot tolerate shame and so want to off-load it like a hot coal to others as quickly as possible. By using the name Other-Blamer, I highlight this tendency, because I believe it is the most important behavior, as it affects the victim’s emotional state as well. Many people get distracted by the classic narcissistic behaviors of vanity or self-aggrandizement, not realizing that the more consequential aspect is that narcs spend much of their time trying to get others to feel “bad” aka guilty.

If you take a look at their various behaviors, the underlying goal is to avoid feelings of inadequacy or failure, hence the blame-shifting. As I frequently write:  The key test is how the Other-blamer handles criticism. If they engage frequently in narcissistic behaviors, then they are trying to disconnect from owning their feelings of shame.

As this graphic shows, emotional boundaries are an important skill for victims of narcopathic abuse. so that they do not automatically feel guilty for some supposed infraction imposed by the narcopath.

Unfortunately, many victims of emotional abuse learned this pattern of relationship in childhood, usually from an Other-blamer parent or sibling. Self-blamers often are highly empathic or attuned to the emotional or physical needs of others, because they have been trained to be by an emotionally abusive family member or members. The narcissist often makes it very uncomfortable or even physically dangerous if you disagree with them in any way. The result is a person who grows up avoiding conflict, people pleasing, disconnecting from their own emotions, and putting the needs of others first.

The work of emotional boundaries is internal, beginning with mindfulness — an open, curious, non-judgmental awareness of how your mind works. Often learned with meditation, self-awareness helps us notice thoughts and emotions as they arise, without dissociating from them or becoming judgmental or anxious.

With mindfulness, we can then learn to pause and wisely choose a different response, rather than reacting automatically. As in the graphic, we can choose to not accept the giant dump of guilt from the narcopath. Their shame is not ours to carry, it is for them to learn to deal with.

Working with people in therapy, I often find they are completely unaware of the tendency to quickly take on the narc’s guilt. I have to get them to pause in the middle of a narrative to see the pattern. For example, maybe they offered up an excuse for the narc: “He drinks six beers a day because his job is so stressful.” Or they believe the blame: “He says he drinks so much because I make him stressed out.” My choice is often to flip the narrative: “Seems like you are under stress, too, what with your husband drinking so much, yelling at you, and spending too much money at the casino. What do you do? Do you choose to drink six beers  a night? Do you blow money at the casino? No? Interesting…what do you make of that?”

Building up a belief in your own self-worth is also a step in the healing process. Many victims of Other-Blamers have heard overt or subtle judgmental messages about their competence throughout their life and need to be very aware of this pattern. It takes conscious, mindful work to question each ingrained assumption that has been delivered by another person. Victims need to ask: “Am I really lazy? Or crazy or bad at cooking etc.” Many victims have learned to rely almost entirely on the opinions of others for “truths” about their character, and, sadly, those opinions may be largely based on a narcopath’s need to feel good about themself.

While we all need to be able to hear legitimate criticism from others, when in a relationship with an Other-blamer, that criticism is often unfounded, excessive, and deliberately personally hurtful. Just as Other-blamers are not tolerant of their own inner weaknesses, they are lacking in compassion for the flaws in others. Being predatory, they will either fabricate or target another’s imperfections and pile on excessive guilt for that mistake.

Everyone can learn the healthy emotional skill of learning to tolerate shame. This means hearing a legitimate fact about their behavior, but then blocking excessive guilt for that behavior. For example, your spouse may say you forgot to pay a bill. If that fact is true, learn to hear it with self-compassion and accountability. What you don’t need to do is pile on excessive guilt far beyond what is necessary. Guilt is the prosocial emotion that helps us learn from our mistakes, but many have learned to apply it with harsh inner criticism that goes on far too long.

Learning self-compassion helps us treat ourselves as a friendly coach who can criticize in a helpful, constructive manner. With self-compassion we can learn to tolerate guilt and shame but also in a self-protective way set emotional boundaries when others use these emotions to abuse us.