Jordan and Roxann had been in couples therapy on and off for about six months and had made many improvements, but they still sometimes struggled with communication. Their latest conflict can provide insights into how to REALLY improve communication in your relationship by deepening your emotional expression with vulnerability.

The start of the conflict was simple: Over the years, they had developed a pattern where Roxann had difficulty initiating sex and being affectionate, which made Jordan feel unloved and unwanted. So it is ironic that the following incident occurred:  They were in bed one night when Roxann touched Jordan’s arm while he was looking at his phone and he failed to respond. She made a snide comment about how he didn’t really love her and rolled over. That night Jordan dreamed that a movie star was flirting with Roxann and then was having sex with her.

The next day, when he told her about the dream, her first comment was: “Well, at least HE wanted to have sex with me.”

Jordan and Roxann and I unpacked this scenario to help them learn a more mindful and thoughtful way of responding based on deeper, more tender emotions. It is essential to look at the emotions driving communication patterns in relationships or the behaviors will never change.

A Model from Emotionally Focused Therapy for Couples 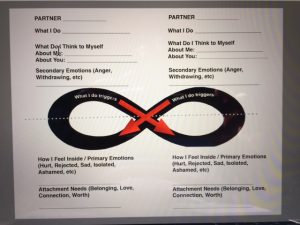 The illustration above provides a paradigm of a negative communication pattern that most couples engage in.

Notice the infinity loop and the arrows – what each partner does or says (or doesn’t do or say) affects the other partner. An incident triggers anger, let’s say, which is communicated to the partner, who feels a primary emotion, such as shame, hurt, disappointment. This is usually accompanied by an attachment fear of being rejected, unloved or unwanted.

In most couples this hidden and more vulnerable emotional experience is unexperienced or ignored by both partners.

Generally, they sweep right past this important psychological information and rush right up above the dotted line into their own reactive response to their partner — most commonly anger or withdrawing.

Most couples only notice the stuff that happens above the dotted line, which gets experienced as some form of endless bickering, fearful avoidance, icy distancing or resentful grudge holding, or a combination of these.

In EFT, we try to get couples to notice this pattern and to become aware of their own deeper emotional responses as part of that pattern.

Correcting this infinity loop in practice involves slowing down, noticing your primary emotions and attachment needs and expressing those to your partner, rather than the secondary emotions.

With Jordan and Roxann we worked to get Roxann to become aware of and express her hurt and feelings of rejection when Jordan was not responsive to her in bed. This carried over to the next morning when he mentioned his dream and she then lashed out at him to try to hurt him back. Jordan then felt offended by Roxann’s jab, yet to her he expressed anger. We worked to get him to realize that the dream made him feel insecure about their relationship and he just needed a hug and some reassurance.

Getting each partner to see their own feelings of shame or inadequacy, and how they quickly trigger into anger or resentment is a key part of this style of therapy.

Then it is important for each partner to feel safe enough to express these deeper feelings to their partner without fear that they may be treated poorly in return. Vulnerability is best nurtured in a calm, welcoming relationship.

Beyond EFT, I also work with couples and individuals, when I can, to improve mindfulness. This is involves becoming aware of how your mind works through observation. As you notice thoughts and feelings, you observe these without judgment. In this way, it can help reduce reactivity, so that you may be less likely to snap at your partner, even if they make a hurtful comment.

Developing self-acceptance is also a very healthy skill for individuals and couples. Through reduced self-blaming, we become less sensitive to the times when we are shamed and blamed by others.

With Jordan and Roxann this entire cycle might have been prevented if when Jordan first “ignored” Roxann in bed, she had not felt so slighted and rejected. With mindful self-acceptance we can learn to see reality more clearly, take compassion on our partner and slow our emotional reactions. She might have just given him a minute to put down his phone, been patient with his initial distraction, and they might have had a very different outcome, rather than several days of emotional struggle and tension.