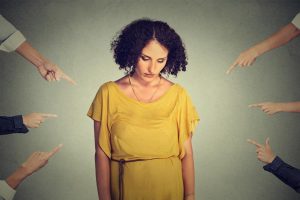 Some people are so well practiced at feeling guilty that they feel guilty when they don’t feel guilty. What do I mean by this riddle?

Let’s consider a scenario of a young woman, Charlotte (fictionalized account) who has been estranged from her grandfather for years. Her grandfather is an extreme narcissist or Other-Blamer who sowed toxicity throughout the family and was uninvolved in Charlotte’s life while she was growing up.

After her wedding, to which the grandfather was not invited, she received a card from him with money and a vague comment: “It’s too bad we haven’t been close.”  She was suspicious about his motives for reaching out to her, but largely felt indifferent about the card. “I had the same reaction to a card from my husband’s co-workers who I don’t know and who didn’t attend the wedding.” In contrast, Charlotte got a card from her cousin, with whom she is close, and just the two sentences in the card provoked tears of warmth and joy.

Yet she also reported feeling “bad” that she felt so uncaring about her grandfather. Rather than merely accept her emotion of indifference as a clear sign of the status of her relationship with her grandfather, Charlotte felt guilty over not having guilt about the lack of relationship. She was like many people who feel sadness over disconnected or toxic relationships with narcissists in their family, even if the narcissistic person is 100 percent to blame for the rift. Given that Charlotte was a small child when her grandfather’s behaviors were occurring, she is clearly not to blame.

All emotions are valuable to listen to, even if they aren’t strong emotions. Charlotte’s indifference sent a valuable signal, just as much as a powerful emotion such as anger or shame would have. An inclination to pull away in avoidance from a toxic personality may be a valuable sign of self-protection that should be honored.

Charlotte is a Self-Blamer who had been trained by narcissists in her life to absorb their blame-shifting. Many Self-Blamers like her get so good at feeling guilt and shame that they even manufacture a lot of their own guilt — guilt-tripping themselves with negative thinking, self-criticism, and worry about disappointing others. Many Self-blamers are so used to feeling guilty about everything, they just head right to that thought process — “I must be at fault!”  This default reaction often serves the abusive Other-Blamers in their lives who enjoy relationships with those who immediately assume blame and protect the Other-Blamer from accountability.

Healthy guilt is a good thing to feel — when you do something wrong, you should experience regret and recognize this as a sign to change your behaviors to something that is in line with your values and morals. But feeling guilty over something that is not your fault is a recipe for self-induced anxiety and depression.

Distinguishing Between Trauma Responses and Intuition

Many people struggle to distinguish between authentic, intuitive, adaptive emotions and what clinicians label as “trauma responses” — learned, habitual responses to past relationships or situations. While maladaptive in adulthood, you can be compassionate with yourself by understanding that these responses were often self-protective in your earlier life.

Many children raised in chaotic or abusive or neglectful households were left to fend for themselves to learn to manage their emotions. This may have led to unhealthy emotional coping, such as emotional shut down and avoidance (emotional over-regulation) or poor emotional control (emotional dysregulation). Survivors of childhood developmental trauma often struggle to attend to, understand and manage their emotions in appropriate ways as adults. Those who tune out their emotions are especially limited in their ability to attend to subtle emotions, such as an appropriate cool withdrawal due to previous maltreatment.

Listening to emotions is important, but listening to what feels like a lack of emotion is important too. Disinterest, indifference or lack of warmth can be helpful signs that should not be ignored.

In therapy we sorted through how Charlotte might respond to her grandfather, perhaps with a non-committal thank you, as you’d send to a distant friend. We worked to get her to recognize that her lack of guilt over the estranged relationship was OK. She had been so used to feeling guilty for EVERYTHING that not feeling guilty had felt odd.

If you are so loaded with guilt that turning off that emotion feels strange?